Materials that Can Replace Asbestos in Construction

The ongoing process of asbestos removal in Edmonton, which is part of a nation-wide asbestos abatement effort spanning nearly 40 years, is a reflection of how much the construction industry relied on the mineral as an ingredient for developing commercial and residential buildings.

And while alternatives to asbestos-containing construction materials have been created since the use of the fibres were banned in the late 20th century, Canada’s Restoration Services’ comprehensive approach to asbestos testing in Edmonton – which includes carefully taking asbestos samples and providing them to a third-party lab for verification –  continues to show that the mineral still lingers in commercial and residential buildings today, primarily those that were built between 1950 and 1980.

Why Asbestos Was Used In Construction 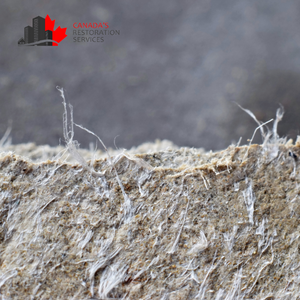 The use of asbestos fibres in construction was widespread across Canada for much of the 20th century. The mineral’s resistance to heat and effectiveness as an insulator made it a popular component in the development of commercial and residential buildings. It’s also worth mentioning that asbestos fibres and construction materials containing them were relatively cheap.

However, the mineral was banned in the early 1990s after health risks associated with breathing in the fibres became more and more apparent. The era of asbestos removal in Edmonton began soon after, as serious, long-term health conditions such as cancer were found to be linked to exposure of the mineral.

Exposure to asbestos is not immediately evident, and it can actually take up 20 to 50 years for symptoms to develop. If you’re a homeowner concerned about the potential presence of asbestos, Canada’s Restoration Services will not only conduct asbestos testing in Edmonton, but we’ll also provide you with a free, over-the-phone estimate on the approved asbestos project.

With the dangers associated with asbestos now common knowledge within the construction industry, alternative materials have been developed to serve as substitutes for asbestos-containing construction materials.

Cellulose Fibres: This is one of the more common alternatives to asbestos. Cellulose fibres are an insulation that is produced from newspaper shreds and other recycled materials especially in attics following vermiculite asbestos removal in Edmonton. The green alternative consists of 85% recyclables, the material is chemically treated to not only reduce moisture, but to increase its resistance to heat and fire.

Flour Fillers: Another green substitute that may consist of wheat flour, rice flour and pecan shell flour. Made from natural materials, the fillers are designed to fill cracks and crevices, while also providing building insulation.

Plastic Flour: A material created from a heated liquid powder, plastic flour can be moulded into any desired shape. Typically filled with wood flour or any other cheap filler, the product can be used in electrical insulation and for automotives.

Silica Fabrics: A leading material within the electrical, aerospace and shipyard industries are amorphous silica fabrics, which are high-temperature protection materials commonly used for insulation. The cloth is not flammable and will not rot, but the fabrics aren’t typically used in residential construction or renovations, as they contain fibreglass.

Polyurethane Foam: This is a spray that is primarily used as insulation in roofing materials. The foam mimics the properties of plastics or rubbers, while the bubbles trapped in the foam limit the conduction of heat and provide efficient thermal resistance.

What To Do If Your Property Is Contaminated With Asbestos

If you are considering replacing the asbestos-containing material found within your property, it’s important that you consult with Canada’s Restoration Services first to avoid risking your health and safety.

Experts at Canada’s Restoration Services will assess the asbestos-containing material to determine if abatement and replacement is required. Should a removal process proceed after assessment and testing is completed, full containment and equipment gear is brought in to ensure that belongings are safe from any cross-contamination during the procedure.

Contact us now to talk to an asbestos expert at Canada’s Restoration Services today!