If your home was built in the mid to late 1900s, your ceiling might be hazardous. Asbestos testing in Toronto from Canada's Restoration Service will quickly determine whether or not you will need asbestos removal in Toronto before you move forward with your ceiling upgrade.

Read on to learn more about asbestos and your ceiling.

Why Was Asbestos Used in Popcorn Ceilings? 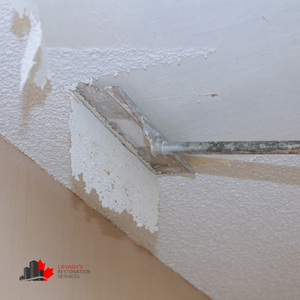 Asbestos is a naturally occurring mineral used in construction for its favourable properties such as affordability, durability, fire resistance. Once it was mostly banned in the 1980s, in most cases, it stopped being mined, and asbestos-containing materials were not being manufactured, but existing products were still being installed. In Canada, a comprehensive ban on asbestos wasn't mandated until 2018. At that time, there has been no nationwide order to remove asbestos from all properties. It's safest to conduct asbestos removal in Toronto as needed. So, in many cases, asbestos is still present in residential and commercial properties across the city and the country. To identify whether you're at risk, professional asbestos testing in Toronto is recommended.

What Kind of Asbestos Was Used in Popcorn Ceilings?

Left alone or sealed, asbestos is often not dangerous, but that's an assessment that should be left to professionals. When asbestos or asbestos-containing materials are at risk of being disrupted through any type of contact, fibres can be released into the air and inhaled, putting anyone in the vicinity at risk of developing chronic illnesses, such as mesothelioma. While any kind of damage, simple accidents, water damage, or acts of nature can cause asbestos to become a severe problem, property renovations are one of the most preventable yet common causes of airborne asbestos.

If you're planning ceiling renovations, upgrades, or remodels do not proceed until you call Canada's Restoration for an asbestos inspection and testing in Toronto. To be safe, pause the use of screws, nails, or even tape in your ceiling and do not begin scraping away stucco. Wait and contain the area where any ceiling fibres may come loose until after asbestos removal in Toronto.